Kendrick Resources Plc (LSE: KEN), the mineral exploration and development company with nickel, and vanadium projects in Norway, Sweden and Finland is pleased to provide an update on its activities in Scandinavia where its broad focus is on nickel, vanadium and copper across the region and the licence portfolio. The current work programme has been arranged to ensure continuous exploration and project advancement whilst accommodating local restrictions and requirements with reference to access and minimising the impact of exploration on the environment.

Colin Bird, Executive Chairman, commented: “We have now completed a full review of the projects within the Kendrick asset portfolio.  What is pleasing is the amount of raw data that has been discovered that has not been digitised or included in previous project assessments. We have spent the period assessing, organising and interrogating the data which has allowed us to start the process of establishing resources for many of our projects and more importantly, building these resources consistent with today’s metal prices and therefore establishing new cut-offs.  The potential strength of our Norwegian nickel assets has emerged which in conjunction with the momentum being shown by projected nickel battery demand has made our nickel campaign a top priority.  We are progressing on all fronts, and we are very pleased with the Airijoki Project where we have encountered significant copper anomalism across the suite of Airijoki licences. We expect to commence confirmation and extension drilling in Norway in the near future and will roll our further drilling campaigns in Sweden to coincide with Swedish legislation regarding the timing of seasonal drilling”.

·    Access has been granted to the Norwegian National Drill Core and Sample Centre for the cutting and sampling of Stormyra Prospect previously unsampled core identified by the Company’s external nickel consultant to be mineralised.

·    Meetings have been confirmed with local authorities around the Espedalen Licence (Stormyra deposit) to provide the Company with an opportunity to update the local government bodies on exploration plans in the region.

·    A 1 tonne metallurgical sample for the Airijoki Vanadium-copper project is being shipped to the United Kingdom for Low Intensity Magnetic Separation (“LIMS”) test work at a recognised laboratory.

·    Soil geochemistry over the Airijoki vanadium – copper licences Airijoki nr 101 – 104 & Airijoki nr 200 has been completed and samples are to be dispatched for analysis.

·    Detailed soil and rock chip sampling is specifically targeting copper following the discovery of widespread copper anomalism across the Airijoki block of licences. Targets of note include:

o  Airijoki nr 101: 2 copper anomalies, the first approximately 2km in length and the second in the south of the licence reporting assays ranging from 1036 to 82500ppb, both coincident with underlying magnetic anomalies.

o  Airijoki nr102: 3 copper anomalies each reporting visible copper associated with the targets and assays ranging from 1036 to 82500ppb. A further area in the NW sector of the Licence was not previously soil sampled despite visible copper mineralisation

o  Airijoki nr103: Anomalous in the N sector of the licence with side-spaced soil geochemistry returning assays ranging from 1036 to 82500ppb. Limited historic coverage over a number of magnetic anomalies in the southern half of the licence.

·    Copper in soils is prevalent across the suite of Airijoki licences and demonstrates good continuity considering the variable density of sampling undertaken historically. The block of licences covers an area of approximately 16km north – south by 7km east west with possible additions to the area under licence subject to recent licence applications.

·    Additional historic data has been unearthed for the Sumåssjön Project in central Sweden. A review has been commissioned from a Swedish consulting group ahead of agreeing a work programme.

·    An interpretation of geophysical survey data collated over the Karhujupukka vanadium Project in Finland has been commissioned.

The Company has secured a slot for the end of the month to access Norway’s National Drill Core and Sample Centre in Lokken Verk near Trondheim. Drill cores from the Stormyra Deposit are stored at this facility and the first phase of core cutting and sampling, on cores selected by the Company’s external nickel consultant considered to be mineralised but not sampled, will be sent off for assay.

In total over 170m of core from five drill holes will be cut and processed, following which the results of this exercise will determine whether further assaying of unsampled drill cores is required prior to further resource definition drilling and resource update for this deposit.

Whilst at the facility, cores for the Megrund target will also be reviewed to assess whether sampling of unsampled intervals need to be carried out on these cores too, prior to commencing a resource definition programme at this target.

Within the next month, representatives of the Company are planning to meet in person with the relevant local and regional authorities for the Espedalen project. This introductory meeting has been initiated by the Company and will be an opportunity to provide an update to the government bodies on the Company’s plans and ambitions in the region.

For the Airijoki nr 200 license, GeoVista will compile and pre-process the slingram, gravity and magnetic data collected over this license and model the magnetic data using the slingram and gravity data to support geophysical model.

Similarly, at the Kullberget 100 exploration license, the VLF and magnetic data will be compiled and pre-processed, with the VLF data used to support the modelling of the magnetic data.

The 521 soil samples collected over the Airijoki licenses nr101, nr102, nr103 & nr104 have been dispatched to the ALS laboratory in Piteå, Sweden for analysis, that will provide the basis to target Airijoki not only for Vanadium, but also Copper.

Simmesvallen License: At the Simesvallen 100 exploration license, the Company has once again engaged GeoVista to review and interrogate the existing magnetic model over the Svedåsen prospect located within this license prior to finalising the drill plan.

Sumåssjön License: The Sumåssjön project area contains two major mafic units, an eastern and a western one, both containing vanadium mineral occurrences and areas of historic mining activity. A program has been put in place to get a better understanding of the known vanadium mineralisation in this license and acquire further field data.

Airijoki – Metallurgical Test Work: The company has engaged Wardell Armstrong to carry out a second phase of metallurgical test work on drill samples from Airijoki with the objective of increasing the overall mass recovery of vanadium into a magnetite concentrate. The metallurgical sample is in the process of being shipped to the UK following which the test work will commence.

The company has approved a ground based fixed loop TEM survey at the Karhujupukka Ni- V2O5 exploration license. The aim of this survey will be to identify anomalies with a high conductivity that may correspond to base metal mineralisation and will assist to zone in on the anomalies generated by the 391km airborne VTEM geophysical survey conducted between 2012 and 2014. This program is expected to commence in about a months’ time and will determine if the airborne VTEM anomalies need to be followed up. 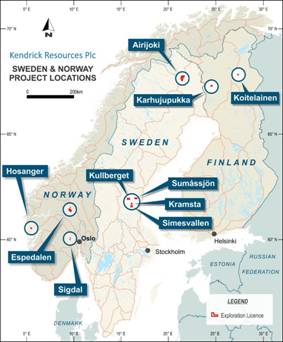 This announcement contains information which, prior to its disclosure, was inside information as stipulated under Regulation 11 of the Market Abuse (Amendment) (EU Exit) Regulations 2019/310 (as amended).

The technical information contained in this announcement has been reviewed, verified, and approved by Colin Bird, CC.ENG, FIMMM, South African and UK Certified Mine Manager and Director of African Pioneer plc, with more than 40 years’ experience mainly in hard rock mining.

Kendrick Resources Plc is a mineral exploration and development company with projects primarily based across Scandinavia. The principal of its business is to explore the opportunities within the natural resources sector with a focus on battery, base, and precious metals including but not limited to vanadium and nickel. In doing so, the Company is looking to build a long-term energy metals business in Scandinavia which delivers energy metals to Europe to help enable its renewable energy transformation by building a top tier energy metals production business.

This information is provided by RNS, the news service of the London Stock Exchange. RNS is approved by the Financial Conduct Authority to act as a Primary Information Provider in the United Kingdom. Terms and conditions relating to the use and distribution of this information may apply. For further information, please contact rns@lseg.com or visit www.rns.com.